Inside the House Where the Sun Does Not Set

Inside the House Where the Sun Does Not Set

“The important goal that needs to be set in Marrakech is drawdown. We need to get back below 350 ppm carbon in the atmosphere, and we need to do it quickly.“ Perhaps it is just an active imagination fueled by the ghouls and zombies roaming London’s streets this time of year, but the olde city seems unseasonably warm, almost as if we had been transported to Quintana Roo and were celebrating Dia de los Muertos.

What has risen from the dead here is not the spirits of the long departed, but hope.

Coming from first the USA and then China, two parts of the world that are nearly tone-deaf on matters relating to climate change, there is a maritime breeze blowing through the British Isles that is entirely refreshing. We are out after dark in light shirts and jeans with John Dennis Liu, Tom Goreau and Daniel Halsey, descending into a pub incongruously called The Coal Hole, to toast to the success of extraordinary events.

This time next week some of us will be gathered in Marrakech for COP-22, the twenty second conference of the 196 parties to the United Nations Conference on Climate Change (UNFCCC) inked in Rio de Janeiro in 1992. This time last year we were readying ourselves for the uncertain outcome of COP-21 in Paris. The difference this time, both in our task and in the momentum being carried, is stunning.

Going into Paris there was only great uncertainty. No-one knew whether it would be another gargantuan bust like COP-15 in Copenhagen or an incremental improvement like COP-16 in Cancun.

Paris turned out to be an historic game-changer, setting the stage for a revolution in the affairs of men, already begun, promising an eventual return to a sacred circular economy seldom seen since the retreat of the Ice Sheets 12000 years ago.

We are gathering here in London to assist preparations of the British Commonwealth countries who seek to speak as a unified voice in this context for a second time. The first occasion came at a critical juncture during the second week in Paris, when it was looking like the best that might be salvaged was another unambitious resolution. Having prepared for that moment, the then 53 countries of the Commonwealth, representing the interests of 2.4 billion people on roughly half the land surface of the Earth, spoke with one voice in demanding a firm legal mandate of two degrees and an aspirational goal of 1.5 degrees. Those goals were, and are, both unobtainable — given what known science and carbon cycle momentum dictate — and political dynamite, but to hear the Secretary General of the Commonwealth tell it, sticking to that and refusing to compromise was what pulled the Paris Agreement out of oblivion last year. Of course, we happen to the think the French had a bit a to do with the success too, as we described in our book, The Paris Agreement, but let the S.G. gloat if she wants, no harm.

She intends to repeat the performance in Marrakesh in November. 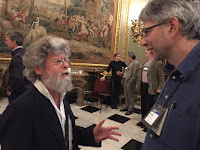 In another part of this balmy London town, HRH Prince of Wales has been hosting a Climate Friendly Landscapes meeting in Lancaster House off Green Park. Our friends Eric Toensmeier  and Rattan Lal are there to share research into carbon removal strategies including tropical tree staple crops, intensive silvopasture and ecosystemic multistrata agroforestry rotations.

Charles could not attend our meeting but sent his representative, Justin Mundy of the Royal International Sustainability Unit. Her majesty’s government also sent a UK Economic advisor and others to participate in our two-day design workshop. Our task was to roll up our sleeves, shed the ties and heels, and give the Commonwealth an agenda best suited to taking the Paris Agreement where it needs to go next.

That destination is beyond zero. It will not do to merely reduce emissions at some set rate per annum, as has been the UNFCCC litany since Kyoto. That must happen too, but the important goal that needs to be set in Marrakech is drawdown. We need to get back below 350 ppm carbon in the atmosphere, and we need to do it quickly. 260 or 280 would be preferable.

When we received the brief for the meeting, a few days in advance, we expected to see academic gearheads hawking harebrained CCS (carbon capture and storage, or “clean coal”) schemes. There was none of that. The Economic Minister confided in us that it was the opinion of government, and the UK science community, that none of those were viable. How refreshing.

In fact, the consensus going in was precisely a breath of fresh air. It was our shared understanding that “clean coal” scrubbing technofixes were rubbish and that photosynthesis, and that alone, will get us out of this predicament, assuming escape is even possible at this point — even if “possibly implausible.”

So it was we found ourselves amongst extraordinarily like minds, such as Christopher Cooke from Savory Institute, David McConville from Buckminster Fuller Institute, Katherine Wilkinson from Project Drawdown, Marcello Palazzi of B-Lab Europe, Bill Reed and Ben Haggard of Regenesis, Louise Baker of UNCCD, Janine Benyus of Biomimicry for Social Innovation, Herbert Girardet of World Futures Council, Isabelle Dellanoy of Symbiotic Economy, Sam Muirhead of Open Source Circular Economy, Daniel Wahl, May East, Maddy Harland, and many others who know of active experience that only soil will save us, but that gaining the social capital to make such a switch is the real challenge we face.

We all seemed to agree in advance that our green buildings and ecovillages must become ecodistricts, eco-countries and eco-hemispheres. The S.G. wants her home country, Dominica, to be a net sequestering model. To save coral reefs we will need to reverse land degradation and put carbon where it belongs. John Dennis Liu kept chanting three simple metrics: biomass, biodiversity, soil organic matter. For our part we can report from our own recent work in the Caribbean that natural climate ecoforestry outperforms Monsanto agrochem 10 to 1 in food provision (and certainly nutrient density) and the return on biochar/biofertilizer investments is 20 to 40 percent per year (in real money).

We tell them we can stop immigration in its tracks with green jobs and food security and we can do it faster and with less CAPEX than constructing refugee camps at every border.

Hollywood endings aside, how this meeting came about is almost in the realm of fairy tales. Quoth the oracle, Wikipedia:

Patricia Janet Scotland, Baroness Scotland of Asthal, PC, QC (born 19 August 1955) is a British barrister who served in junior ministerial positions within the UK Government, most notably as the Attorney General for England and Wales and Advocate General for Northern Ireland. At the 2015 Commonwealth Heads of Government Meeting she was elected the 6th Secretary-General of the Commonwealth of Nations and took office on 1 April 2016. She is the first woman to hold the post.

The Baroness, who prefers to be called just S.G. (Secretary General) is a force of nature. The 10th child of 12 born to a Dominican mother and Antiguan father, she came with her parents to England in 1957. She excelled in school work and took a law degree from Mid Essex Technical College, joining both the British and Dominican bars. In 1991, Scotland became the first black woman to be appointed a Queen’s Counsel. Her work on the Commission for Racial Equality earned her recognition by the Queen and a life peerage in 1997. She then became Parliamentary Under-Secretary of State at the Foreign and Commonwealth Office, where she was responsible for the UK Government’s diplomatic relations with North America, the Caribbean, and Overseas Territories. In 2001 she was made a member of the Privy Council of the United Kingdom. She was the minister formally responsible for civil justice and the reform of civil law including the comprehensive reform of land registration. In 2007 she was made Minister of State for the Criminal Justice System and Law Reform at the Home Office, where she created the Office of Criminal Justice Reform. She also created an advisory group on victims and the Criminal Justice Centre, Victims and Witness units.

She was then appointed UK Attorney General by Prime Minister Gordon Brown, the first woman to hold the office since its foundation in 1315. She served the Labour government in that role until 2014.

At the 2015 Commonwealth Heads of Government Meeting, Scotland was elected as the 6th Commonwealth Secretary-General and the first woman to hold the post. She began her first of a maximum of two possible four-year terms on 1 April 2016. She told us that at her first meeting with the 53 High Commissioners she polled them to see what were the priority issues. Climate change came out on top. The threat to the small island states in the Commonwealth was existential.

“We are 2.4 billion people on half the land area in the world,” she told us. “It is 21 percent of the world’s forested area. We are joined by common language and common culture. And now we are joined in common purpose.”

What we were in that palace for was to provide the solutions, as thin as their chances of succeeding at this late hour might be. We were not placed here to go into separate silos. We were brought here to bring it all together: permaculture, biomimicry, holistic management, agroforestry, climate finance, the circular economy, ecovillages and atmospheric regenesis. This was not the Shark Tank or the Dragon’s Den. We are none of us here to self-promote or compete for a prize. This is Extreme Makeover: Ecosystem Version. Disruption is the new norm. The tables in the temple have been upended. The moneychangers have been driven out.

What is your vision of what can happen next? Ours, cobbled together in two long days, is now what the Commonwealth countries will carry with them to COP-22.